Read Biden’s Lips: “More New Taxes” What Is a Fair Share of Taxes? 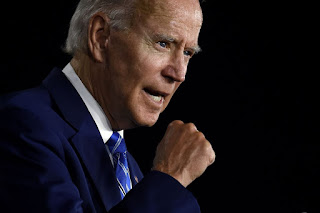 In an effort to bolster the likelihood of his election, presidential candidate, George H.W. Bush proclaimed “Read my lips, no new taxes” at the 1988 Republican National Convention. In sharp contrast, 2020 Democrat presidential hopeful, Joe Biden essentially shouted, “Read my lips, more new taxes.” Biden argues that the U.S. economy needs more spending, and requires more taxes.
﻿He bases his tax hike plan on three factors or allegations: 1) the Trump 2017 tax cuts hurt the economy, 2) high income earners should pay a greater and a “fairer” share of taxes, and 3) the U.S. economy needs more than $5 trillion in additional federal spending over a decade to pay for his proposed new spending programs.
Are Biden’s assertions accurate?
1) Trump tax cuts hurt economy.  Biden and his team allege that the December 2017 tax cuts reduced tax collections to levels jeopardizing growth with consequent massive fiscal deficits. However, for the two years after the tax cuts, total federal government receipts climbed by 5.3% compared to a much slower 2.2% for the two years prior to the 2017 tax cuts.
As a result of the slashing of the corporate income tax rate, corporate tax collections fell by 11.4 in the two years after the 2017 cuts. However, this decline is smaller than the 25.4% fall for the two years prior to the 2017 cuts. Furthermore due at least in part to the corporate tax reductions, business investment soared by 11.9% for the subsequent two years in contrast to 4.7% for the two years preceding the 2017 tax cuts.
Moreover, economic performance, as measured by GDP, accelerated after the tax cuts from 9.7% for 2017-19 compared to 5.9% for 2015-17. Furthermore, the Census Bureau reported in September that the median household income advanced by a massive 6.8% in 2019—the largest annual increase on record. Biden is clearly wrong on this count.
2) High income earners do not pay their fair share.  According to the National Taxpayers Union, the top 1% of income earners in 2017 netted 21% of the nation’s adjusted gross income, but paid 38% of U.S. personal income taxes. On the other hand, bottom half of income workers netted 11% of the nation’s wages, but they paid only 3% of personal income taxes. In fact, fully 32% of filers in 2017 paid no income tax. From the perspective of high income earners, Biden is likely wrong again.
3) Biden's economy needs new tax collections. The Wall Street Journal reported that Biden’s spending proposal would “total $5.4 trillion in new spending over the next 10 years” based on an analysis by the Penn Wharton Budget Model, a nonpartisan group.  “This is the largest proposed spending increase by a presidential nominee since George McGovern,” says Kent Smetters, a Wharton economics professor who oversees the budget model project. Biden is correct here.
Ernie Goss
Posted by Ernie Goss at 8:48 AM