President Biden recently touted the February 2022 jobs report showing a worker wage gain of 5.7% since he took office as evidence that his policies are helping workers. This is small comfort to workers staring at inflation running at 7.5% during the same time period. This means that in terms of inflation adjusted wages, U.S. workers’ inflation adjusted wages, termed "real wages," actually declined by 1.8% since January 2021.

Even workers like Omaha manufacturing laborer Johnny Jones, who this month accepted a position at a competing food processing company for a 5% wage improvement, and a $500 bonus, is feeling the inflation pinch. Just this month his landlord raised his monthly rent by the national average increase of 14.1% or $141, and his family’s food bill soared by 6.3% (the national average), or approximately $43 monthly. And as he shops for a used auto to ferry him to his new job, he found the cost has skyrocketed by 37.3% to $19,000 over the past 12 months.

Jones, much like other Americans, is discovering what economists have been howling for over a year — that the rising costs of living has overwhelmed income gains for even those receiving raises. “So much for my raise and bonus,” complained Jones.

While Jones’ experience under Biden has not been great, expected presidential boasting, such as Biden’s, advances the more important question: which U.S. president has provided the most support for wage earners, and which president has been most supportive of businesses?

Table 1 below ranks each U.S. president since 1950 in terms inflation-adjusted growth in worker compensation (hourly wage plus benefits) and business profits during his time in office.

As listed among the 13 presidents since 1950, President Biden ranked fifth in terms of worker compensation growth, but twelfth in terms of business profit growth.

And contrary to the popular narrative that workers have lagged businesses in terms of economic returns, worker compensation expanded by 2.8% and business profits advanced by a smaller 2.6% under the 13 presidents in terms of CAGR 1960-2022. 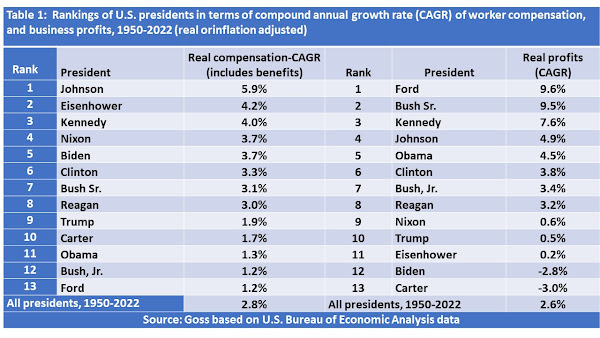