Do Red states, which are viewed as more pro-business and tax friendly, experience superior economic performance when compared to Blue states that are seen as more pro-government and tax burdensome? That is, have the states voting for the Democrat presidential candidate in the last three elections (Blue), or the states with electoral votes cast for the Republican in the last three elections (Red), experienced the best economic performance? Alternatively, have the Purple states, states that voted for the Democrat presidential candidate in at least one of the elections, and the Republican in at least one of the three presidential elections been the top performing group?

Moreover in terms of overall growth (GDP), 8 of the top 10 performing states were Red states while only 4 of the 10 bottom performing states were Red. On the other hand, Blue states tended to have a somewhat more evenly distributed income with a median Gini coefficient of 0.450 compared to Red and Purple states’ 0.455. Gini coefficients range between 0 and 1.00 with lower coefficients indicating more evenly distributed income. Details of the analysis are in the accompanying table. Ernie Goss. 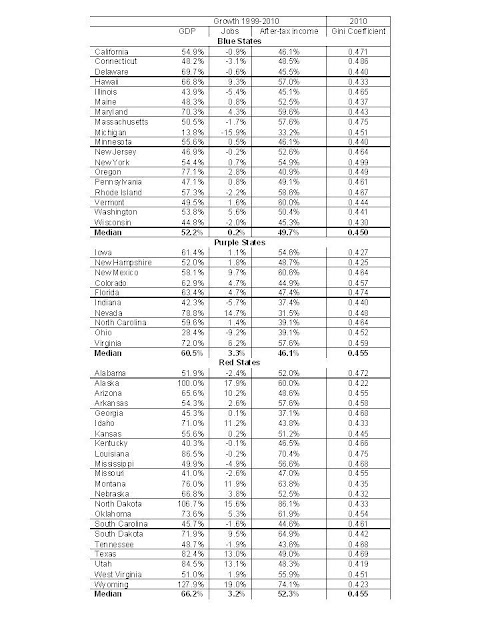 You'd think this is the kind of thing that would be brought to more of a forefront in an election year. Guess that's the media for you.

Do you think it is possible that the people in the states who are voting Blue are doing so because they are not experiencing the economic benefits that the Red states are, for various regional reasons. So they are voting to try and make a change that will benefit them? In other words their vote reflects the economic plight they are in rather than that their vote is causing their economic conditions?