From Truman to Obama: Presidential Economics

From George Washington to Barrick Obama, U.S. presidents sell their administration’s economic accomplishments normally striking a tone somewhere between Arthur Miller’s Willie Loman and Meredith Wilson’s Harold Hill. For example, just this year President Obama claimed that, “Anybody who says we are not absolutely better off today than we were just seven years ago, they’re not leveling with you. They’re not telling the truth.”

The question is not whether Americans are better off, it is how much better off are they after recovering from the 2008-09 recession? In the accompanying table, economic progress during every economic recovery since 1947 is compared for each U.S. president. As presented, despite a $900 billion stimulus package in 2009, record low interest rates. and continuing annual deficit spending above $500 billion, President Obama has presided over the weakest economic recovery since the Truman Administration. 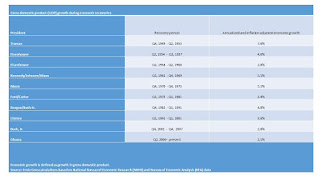 What accounts for the poor economic performance in the current recovery? More and more evidence point to rising regulations as the economic culprit. At the current pace of rulemaking, the American Action Forum estimates the Obama Administration will issue a total of 641 major rules before the president leaves office, bringing the nation's regulatory bill to $813 billion. By contrast, President George W. Bush issued 426 major rules during his tenure in the White House. According to the Wall Street Journal, the Obama Administration is responsible for six of the top seven years of red-tape creation in the nation’s history. Under George Bush Jr. we had “no child left behind,” but under Barrack Obama we have gotten “no economist or lawyer left behind.”

Two of Obama’s legislative/regulatory programs demonstrate the negative impact of expanding regulations. First, the Affordable Care Act (ACA) signed into law in 2010 demands that companies with more than 49 workers either provide health insurance to employees working 30 hours or more weekly, or pay a stiff fine. Not surprisingly since January of this year, Americans working part-time due to business conditions has risen at more than twice the pace of overall employment growth.

A second, major economic growth killer is the Dodd-Frank Act. Said the U.S. Chamber’s David Hirschmann, president of the Center for Capital Markets Competitiveness, "It (Dodd-Frank) increased uncertainty for American businesses and hindered their ability to promote economic growth and create jobs." Since passage in July 2010, commercial banks have shed 2.7 percent of their employees in contrast to firms outside of commercial banking that expanded their jobs by almost eleven percent during the same time period.

In Creighton’s monthly survey of bank CEOs in rural areas of ten states, bankers indicated that rising regulation was, and would be, the number one factor threatening their bank’s growth prospects. In our October 2016 survey, 27.3 percent of bankers indicated that rising regulation represented in their bank’s greatest economic challenge over the next five years.

Even with the onslaught of regulation at the national level, I expect the national economy to continue to grow by 2.3 percent in 2017 even as rural areas of the nation heavily dependent on agriculture and energy experience flat to slightly negative growth for the first half of 2017. U.S. businesses and consumers are riding a thoroughbred economy, but with the reins tightened by federal regulatory bodies. It is time to “let the big horse run.”
Ernie Goss