Did Your Home Earn More than You Did in the Past Year?

According to the U.S. Bureau of Labor Statistics, average hourly wages rose from $30.02 in April of last year to $34.95 in April of this year, a gain of 5.8%. Over that span of time, the average worker’s wage/salary increased from $54,807 to $57,484 after accounting for hours worked. Unfortunately, this wage/salary gain was well below the 8.3% increase in consumer prices. Not only did the average worker suffer a 2.5% loss in inflation-adjusted wages, the worker lost ground to the homeowner.

Take two individuals for example, Karen Walker, a retail manager living in a rented apartment, and Jack Stone, an unemployed homeowner. According to the Case-Shiller Home Price Index, the median price of a U.S. home soared from $313,272 in February 2021 to $375,300 one year later.

Thus, Jack Stone, who stayed home and tended to normal home maintenance, earned $62,028 without leaving the comforts of home, except to cut the grass, and visit his bank to tap his home equity for living expenses. On the other hand, Karen Walker, the renter with no automobile, trekked to work via public transportation and earned approximately $11,000 less than Stone who stayed home and spent the day watching re-runs of Seinfeld.

Adding to Walker’s relative misery, Stone, owner of a three-year old Chevy Trailblazer, experienced a 2021-22 gain of roughly $6,000 as the resale value of the SUV jumped from $27,804 to $34,449. Thus, the unemployed Stone, via home and automobile ownership, was $18,000 wealthier at the end of the year than Walker who worked the full year, but owned neither home nor auto.

These income profiles show clearly how the easy money policies of the Federal Reserve, and the heavy federal spending during the pandemic widened the wealth gap between asset owners and non-owners. Ernie Goss 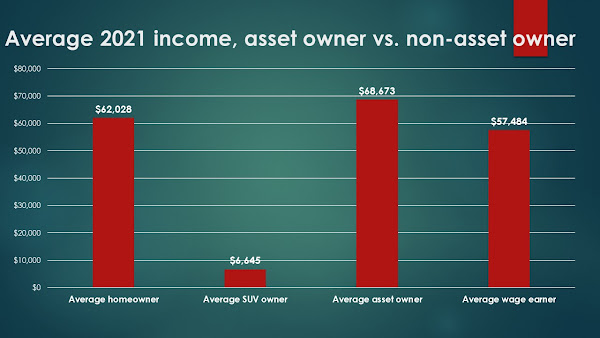