Today's releases of the May 2022 consumer price index and consumer sentiment were much worse than expected. I have graphed both measures below. This is the highest inflation recorded in 41 years, and the lowest consumer sentiment recorded since the index was launched in 1952.

The U.S. recession ended in the second quarter of 2020, yet the Biden Administration in 2021 pushed a $1.9 trillion stimulus spending program through Congress, and a $1.0 trillion infrastructure spending program.

To support this overspending, the Federal Reserve increased the U.S. money supply by 40% between 2020 and 2022. Note that the explosion in inflation and downturn in consumer sentiment preceded the Russian invasion of Ukraine. 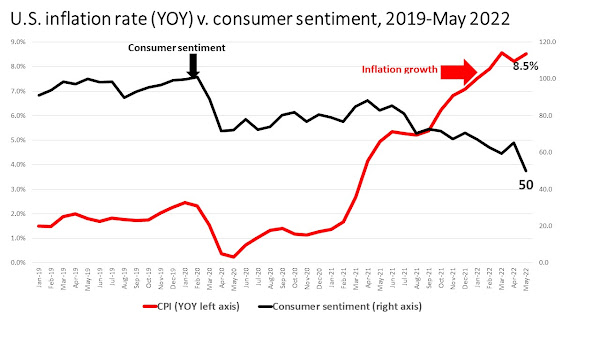 The Federal Reserve is very apt to get more aggressive in raising short-term interest rates beginning next week. I expect the prime interest rate to rise from its current level of $4.0% to 6.0% by the first quarter of 2023. Ernie Goss
Posted by Ernie Goss at 2:30 PM